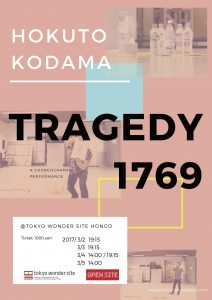 Trace(s) is a performance by Hokuto Kodama.

Water reminds me of the ‘phantom’, as it moves freely between the presence and non-presence. Following the trace of such phantom within the non-fictional episodes, I draw a line of flight which cuts across the strata of history, in attempt to deconstruct the problems of modernisation as well as the questions of subjectivity. Being influenced by thinkers such as Jacques Derrida and Bruno Latour, the complex journey in search for non-presence ends up in puzzling assemblage, as I find myself inside the fragmented memories of the past. Despite its lecture-like format, there is nothing to learn from this performance, instead, it communicates the communicability of non-presence.

Hokuto Kodama’s  choreographic research project deals with the modernistic epistemological field consisting of linear history and dualistic relations. By the investigation of social structures through the politics of body and the historicity of dance, he aims to empower the corporeal thinking process, in order to question the fundamental conditions of dogmas of our epoch. 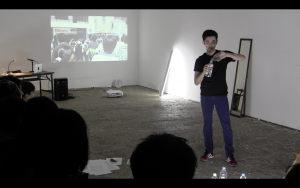 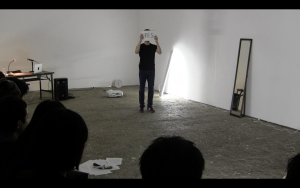 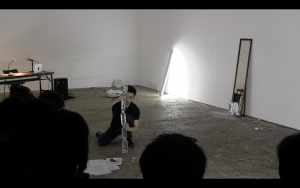 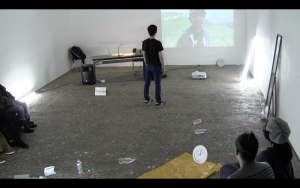 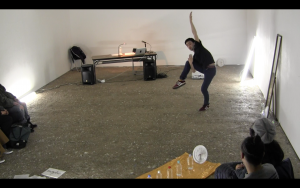 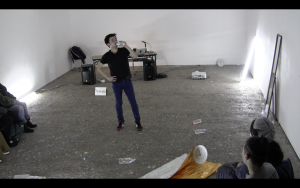 This solo work is based on the short work I have created for the entry exam of the Master program I am currently studying. Water, once considered to be the ‘arche’ but now captured in a plastic bottle, and the reign of economic system which captured such ‘arche’ in its circulation. I got really excited about this relation, and to create a work that is ‘dry, cynical and critical’, but upon re-approaching, I went back to the fundamental ‘why’ that makes me create this work, and started from a blank sheet.

In the beginning of 2015, I lost my father. Losing someone who was not only my father, but my dance teacher at childhood, my relationship with dance had been destabilised from its foundation. This is when I encountered the artwork by Chinese artist Song Dong called Waste Not. It is an installation work compiled of massive amount of useless objects, which his mother obsessively collected since the death of his father. Among the collection, the large amount of empty plastic water bottle really struck me with a sort of unheimlich feeling. I sensed more reality in strong ‘non-presence’ of water rather than the presence of water bottle that was there. Looking back, this was the beginning of my creation process. There was nothing ‘dry, cynical and critical’ at all at the base of it. I had been distant to creation then, but I got more interested in notion of choreography that is a re-reading of existing relationship as a line of flight, rather than setting a framework of some sort.

In this work, I attempt to juxtapose fragments of relations between binaries like culture/nature or presence/non-presence, with water as its protagonist. The presence behind the non-presence that is behind the presence… consisted perhaps in Möbius loop like topology. This might be the very reason why we cannot really reach ‘the other side’. Searching blindly for the trace of non-presence, I depart on the journey to the enormous temporal field that is folded into the events of being…

HUGE THANKS: to all the staff at Tokyo Wonder Site who really made this journey possible, to all the encounters and inspirations, my family, teachers, friends who supported me throughout since the ‘beginning’ of the process.

I would have been totally lost without you…